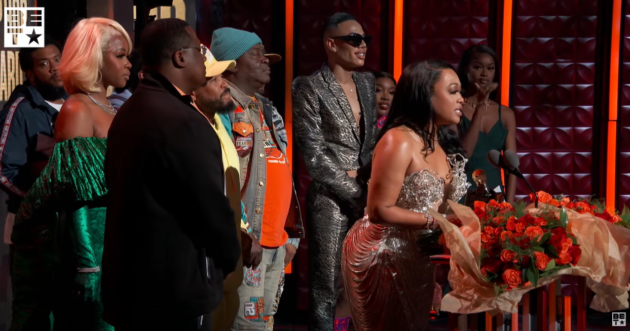 BET celebrated the year’s big names in Hip-Hop music and culture with their 17th annual BET Hip-Hop Awards. The event was taped over the weekend at Atlanta’s Cobb Theater and aired on Tuesday evening (Oct. 4).

Fat Joe pulled a double-duty as both host and performer throughout the evening and opened up the ceremony with his hit single, “All The Way Up. Bleu and French Montana gave a televised debut performance of their new collaboration, “Life Worth Livin”, GloRilla glowed with “Tomorrow”, and Joey Bada$$ took the spotlight with his “Head High”. Meanwhile, EST Gee and Jeezy brought the trap to the theater with collaboration, “The Realest”, Fivio Foreign repped New York with his “City Of Gods”, and Lil Tjay made his triumphant return with “Beat The Odds”.

Keeping the yearly tradition going, the Cyphers were aired as well featuring this year’s participants Guapdad 4000, Ray Vaughn, Baby Tate, Sauce Walka, OT The Real, Reuben Vincent, and Topaz Jones, among many others. The battle rap scene was also recognized with DNA and K-Shine going head-to-toe on stage.

The BET Hip-Hop Awards had a few big wins throughout the night. Kendrick Lamar racked up six awards in total including Best Live Performer, Lyricist Of The Year, Video Director Of The Year with Dave Free, Best Hip-Hop Video for his appearance in Baby Keem’s “Family Ties”, Hip-Hop Artist Of The Year, and Hip-Hop Album Of The Year for his critically-acclaimed and chart-topping album, Mr. Morales & The Hotsteppers.

The ladies of Hip-Hop came out strong this year with Latto’s “Big Energy” winning Song Of The Year, Lizzo’s “About Damn Time” given the Impact Track, and GloRilla being crowned as Best Breakthrough Hip-Hop Artist of the year. Miami’s finest Trina received her flowers as this year’s recipient of the prestigious I Am Hip-Hop award. She was joined by Trick Daddy and others during her emotional acceptance speech.

Other noteworthy wins of the evening including 50 Cent taking the Hustler Of The Year, DJ Drama bestowed the DJ Of The Year, and EARTHGANG was named Best Duo or Group. Hitmaka was dubbed Producer Of The Year, France’s Benjamin Epps taking the Best International Flow, and Yung Miami’s Caresha Please and N.O.R.E. and DJ EFN’s Drinks Champs both taking Best Hip-Hop Platform.