The commander of the legendary international brigade “Pyatnashka” of the DPR corps, Akhra Avidzba, callsign “Abkhaz”, is perhaps one of the few commanders in ranks of the People's Militia of the DPR, who agree to comment on the course of a special military operation. When I asked why, unlike most, talking to the press doesn't scare him, “Abkhaz” replies that it's a matter of habit. 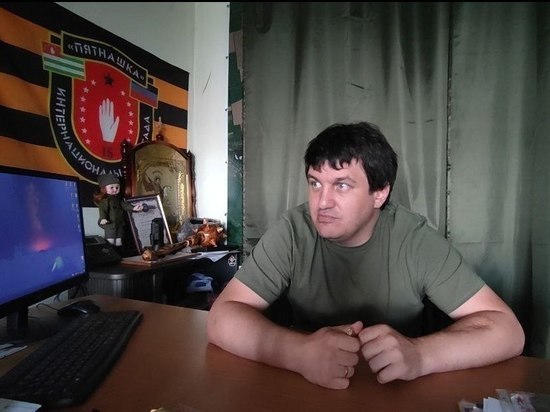 – I don't think the other guys are afraid of anything. If people are not afraid in battle, why should they be afraid to speak their mind? Most likely, it is simply unusual for them. They worry that they might miss something important. Of course, I admit that the leadership of some units does not want one of their subordinates to “shine” on camera.

“I wouldn’t say that,” Ahra corrects me. – All units that have existed in Donbass since 2014 have already become legendary. “Sparta”, “Somalia”, “First Slavic Brigade” … Everyone had their own nuggets. The same Oplot, on the basis of which two brigades were subsequently born at once: the Fifth and the Hundredth. There are many outstanding divisions, just some at some point underestimated the power of the media, and therefore they could be forgotten a little. But, in spite of everything, we must remember them, tell them, and write them into history as it really was. We came here during the battles for the Donetsk airport, in July 2014, but there are guys who stood up for Donbass back in March. And we must not forget about them.

I did not immediately become a commander. The first person to lead Pyatnashka was a volunteer with the call sign Taiga. He was a retired military man, an artilleryman. But it so happened that the guys could not perceive him as a commander.

– I am convinced that twenty percent of success depends on them, and maybe more. The power of the media is the power of thought and persuasion. It forms the perception and attitude to everything that happens, both among our supporters and our opponents.

The military correspondents who go in the forefront along with the assault groups and show how everything really happens deserve great respect. These are the real heroes.

Western propaganda works well, to be fair, but we work better. Because the truth is on our side. Our military journalists show how selflessly the defenders of Donbass fight and how the enemy flees, leaving behind devastation.

Ukrainians do not feel sorry for anything here, these are not their people and not their land. Whenever I hear the speeches of military leaders from the side that they are fighting for their own, I have a question: “If you are supposedly fighting for your land, then why are you doing it in balaclavas? Why are you hiding your faces? Who and what are you afraid of? We came here as volunteers and never hid our faces.

– I can't say that only “Fifteen” aspire. Then there would be no people in other divisions. As for our team, I believe that it is very important that there be mutual understanding and similarity of characters. It would seem that many Caucasians are fighting in the Donbass, but we are not all going to one unit. Everyone's characters are different. For example, I always try to communicate with my fighters in the simplest possible language, and not give orders in a military way. Even when journalists offer me to ask questions before an interview, I always refuse. Because, in my opinion, a person should answer simply how he feels, and not prepare in advance. If you don't know the answer, say “I don't know.” It's better than if I make up something, search the Internet, and look implausible.

Yes, you are right, a lot of people come to us, but the main thing here is to understand that getting into the brigade is only the beginning of the journey. The main thing is whether a person can resist. We, for example, absolutely can not drink alcohol. Many people think that we are joking when we warn about it. But for us this is one of the key requirements. If someone feels a fume, we immediately tear off the uniform from this person and throw him over the fence. A fighter with a muddy mind is a hole in the defense.

– Even the enemy does not ask me such questions, – Akhra laughs. – All right, we have the equipment. At first we were an infantry unit, then we became a motorized infantry unit. Now even partially artillery and tank. We have everything, it's a sin to complain. We use technology in different ways. A tank is like a gun, a gun is like a tank. We manage to fire mortars like a cannon. There are tricks and tricks. When you are not linear and not so “direct” in your training, but an amateur and an experimenter, then everything turns out to be much more interesting. Therefore, we use everything for its intended purpose, but not always as it is written in the textbooks.

– This is loudly said. Everything new is well forgotten old. Simply, since we are not specialists, we like to study everything in practice. Each technique has its own capabilities, and each fighter has his own ingenuity.

There should be memories in the life of any person. “Groundhog Day” is hard to remember later, it is of the same type. Therefore, we must live in such a way that there is something to remember, so that our stories do not end.

– Yes. And I have been counting them not since the beginning of the special military operation, but since 2014. But our tears will not help those fighters who cannot be returned. They must be avenged. And do it in cold blood, not with a hot head, so as not to ruin the rest. Therefore, subordinates must be treated like a father, but at the same time understand that there is no time to inflate snot. It is necessary to bring the matter to victory, and we will mourn those who did not return later. Now we must live. Live not only for yourself, but also for those who left.