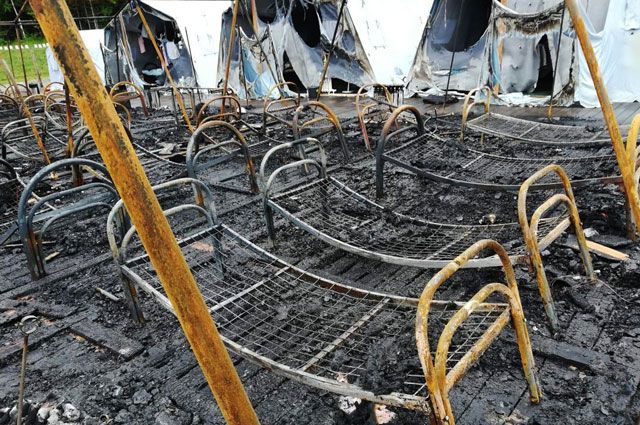 On September 23, the Solnechny District Court of the Khabarovsk Territory passed a verdict in the case of a fire in the Kholdomi camp, in which four minors became victims. There were three people in the dock, whose actions led to the emergency.

The horror of the July night

On the night of July 23, 2019 in the children's camp on the territory of the Kholdomi ski base in the Khabarovsk Territory a strong fire broke out. Of the 26 tents, 20 burned down completely, another six were seriously damaged.

Despite the fact that the fire was quickly localized, many of the tents were left with only deformed frames of metal beds.

Martynenko received severe burns while trying to save the girls who could not get out of the burning tent. By decree of Russian President Vladimir Putin, he was posthumously awarded the Order of Courage.

“Is it that the adults lived in the buildings, and the children were kicked out into the street?” Maxim Kuznetsovstated in an interview with AmurMedia immediately after the fire: “Our camp was constantly checked. We have all the permits from both the State Fire Supervision Service and Rospotrebnadzor. There were scheduled inspections, and documents were issued for the arrival of 450 children. There were visits both before the opening of the children's shift and after. The fire department was here for three months, conducting its scheduled and unscheduled inspections. And in May, and in June, even in July. On the territory of the tent camp two weeks ago they carried out planned evacuation activities. It is difficult to find such a children's camp that would be checked as often as ours. We have always been open to any form of inspections, both scheduled and unscheduled. We followed all orders. The tent city, by the way, last year as part of the Amur forum; received personally by the governor with the regional commission. Nothing has changed since last year. As they stood, so they remained. The tents could be operated at temperatures from plus 40 to minus 50.

However, it quickly became clear that the authorities were not aware of the placement of children in tents. Then moreGovernor of the Khabarovsk Territory Sergey Furgal at an emergency meeting asked the question: “Is it that the adults lived in buildings, and the children were kicked out into the street? If I had been informed that a tent camp was set up for children — he would be gone in 10 minutes.

Very interesting things came up during the meeting. A representative of the Ministry of Education said that the camp actually received a license from Rospotrebnadzor on October 26, 2018, however, the State Police Supervision Service did not participate in the acceptance of the camp at all, since this is not provided for by federal law. only stationary buildings, not tents.

According to representatives of the Ministry of Education of the Territory and Rospotrebnadzor, they had no information at all that on the territory of “Kholdomi” there is a permanent campground.

And so it will do: how adults didn’t give a damn about security measures

The investigation brought charges against three responsible persons — camp director Maxim Kuznetsov, head of Extreme-Service LLC; Vitaly Burlakov— the owner of the tourist complex “Holdomi”, as well as the head of the department of supervisory activities and preventive work for the Solnechny district of the department of supervisory activities of the Main Directorate of the Ministry of Emergency Situations of Russia for the Khabarovsk Territory Eduard Novgorodtsev.

According to the prosecution, Novgorodtsev knew for certain that the campground and its location during an unscheduled inspection conducted from May 29 to May 31, 2019 were not subjected to fire safety.

The investigators concluded that the causes of the tragedy were violations of fire safety rules during the operation of the heating device, the lack of instructions in the camp on the actions of personnel to evacuate people in case of fire, and the failure to issue personal protective equipment to personnel.

The guilt has been fully proven

The court considered the guilt of the defendants proven. The owner of the tourist complex, Burlakov, was sentenced to 9 years in prison with the deprivation of the right to hold positions related to the upbringing of minors for a period of 3 years.

Camp director Kuznetsov received 8 years with the deprivation of the right to hold positions related to education of minors, for a period of 3 years.

Novgorodtsev was sentenced to 4 years in prison with deprivation of the right to hold positions in public authorities for a period of 3 years. The convicts will serve their sentences in a general regime colony.