In total, there are 1,287 aircraft in Russia (including cargo, private and state aviation). Of these, as of April 20, 2022 1111 ships were registered in the Russian register. This is reported by the Association of Tour Operators (ATOR) with reference to the data Ministry of Transport, specified in the program for the development of the air transport industry of the Russian Federation until 2030.

What aircraft are there in the Russian fleet?

Out of the total number of aircraft (1,287) — only 1 101 passenger aircraft, including 801 “main aviation” boards. The rest — these are cargo planes (84), business jets (42), as well as 60 aircraft (presumably) state aviation — they are designated as « actually not involved in commercial transportation,” notes ATOR. 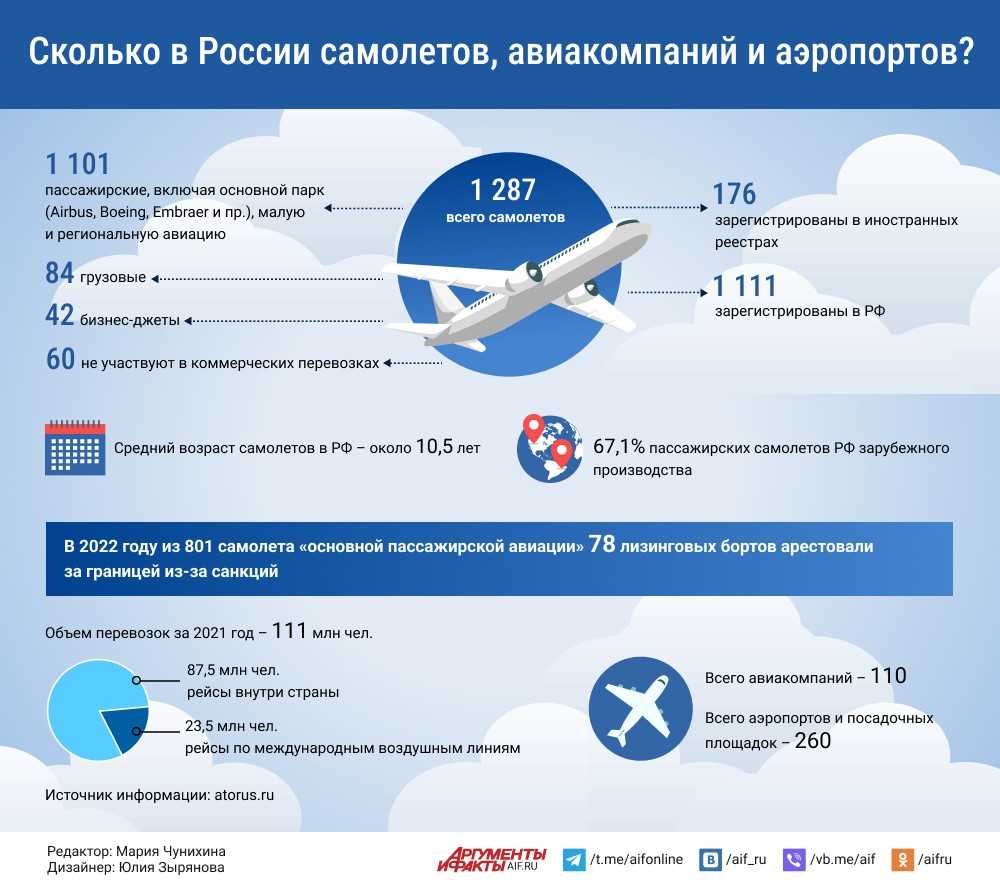 How many foreign-made aircraft are there in the Russian fleet?

According to the Ministry of Transport of the Russian Federation, the share of foreign-made aircraft in the commercial fleet of passenger aircraft is 67.1%.

At the same time, one should not forget that in March 2022, out of 801 aircraft of the “main passenger aviation” 78 foreign-made aircraft were arrested abroad due to sanctions. They are unlikely to return to Russia. This means that now there are not 801, but only 723 aircraft in large aviation.

It is also indicated that Russian airlines have leased more than 700 aircraft (including cargo) from foreign lessors.

Recall that due to sanctions, foreign lessors not only withdraw their aircraft from Russia, but also cancel the supply of new equipment and refuse to service and supply components for foreign-made aircraft.

What is the average age of the fleet in Russia?

According to the Ministry of Transport, the average age of passenger aircraft of commercial airlines is about 10.5 years, including the most popular types of aircraft:

What does the strategy for the development of the aviation industry until 2030 look like?

According to "Kommersant", the draft comprehensive program for the development of the air transport industry involves replenishing the fleet with 1,000 Russian-made aircraft by 2030.

It is also noted that the strategy has two scenarios — basic and additional (pessimistic). The first assumes that market participants will find some channels to replenish stocks of components and consumables. In the second — expectations that if it is not possible to replenish the stock of spare parts, then, given the problems with the maintenance of foreign aircraft, their fleet  "is intensively reduced, and in the future its disassembly ensures the airworthiness of the aircraft fleet remaining in operation".

“By 2030, the fleet should grow to 1602 aircraft (208 foreign) due to the accelerated production of domestic aircraft. The pessimistic forecast assumes that foreign aircraft will retire faster, so it includes 870 aircraft by 2025 (of which 298 are foreign) and 1556 aircraft by 2030, — writes the publication.

How many airports and carriers are there in Russia?

There are 260 operating airports and landing sites in Russia through which air transportation is carried out. Commercial civil aviation operator certificates have been issued to 110 airlines, ATOR notes.

According to "Kommersant", according to the industry development strategy until 2030, the passenger traffic forecast is as follows: