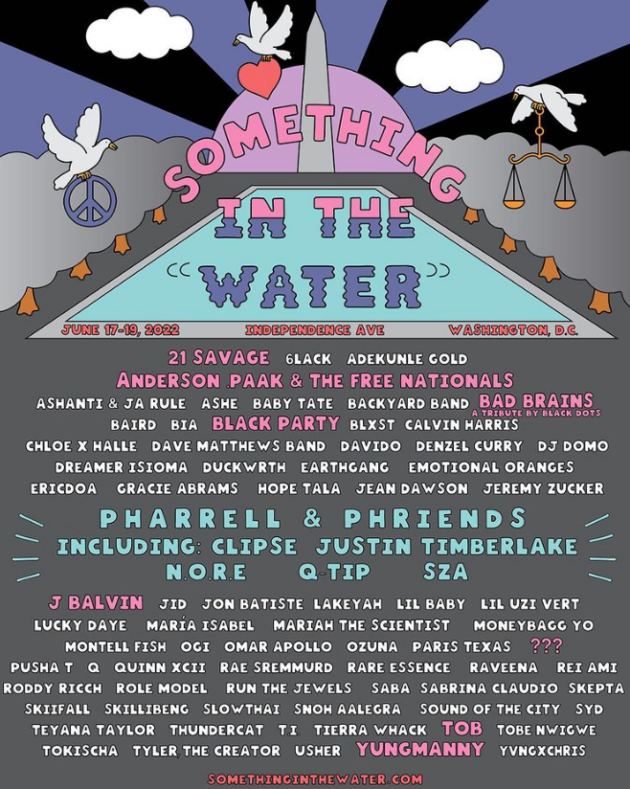 Just a week before showtime, Pharrell has reupped the line-up for his Something In The Water music festival.

In April, Pharrell revealed the annual festival will relocate on Independence Avenue in Washington, D.C. during Juneteenth weekend on June 17-19. The three-day festival will be headline by Pharrell with his newly announced guests, as well as Lil Baby, Usher, Tyler, The Creator, Pusha T, Chloe x Halle, Lil Uzi Vert, Tierra Whack, 6LACK, and Run the Jewels.

The festival will also host performances by Ja Rule with Ashanti, Moneybagg Yo, Roddy Ricch, Lucky Daye, Syd, Thundercat, Blxst, JID, and many more including Go-Go musicians including Backyard Band, Rare Essence, and Sound of the City.

Something In The Water began in 2019 in Pharrell Williams’ hometown of Virginia Beach, but it was canceled the following two years due to the coronavirus pandemic. Last year, Pharrell announced the festival would not return to VA Beach following the city’s lack of support to the fatal police shooting of William’s cousin, Donovan Lynch.

“Something In The Water is a Black solution (LOVE) for a systemic issue, and this year we are taking our celebration to a higher platform – the nation’s Capital during Juneteenth Weekend,” Pharrell said in a statement. “We want to show the world that there is Something In The Water across the whole DMV and I want to continue to bring awareness to the greatness within these communities and invite large corporations to show up for the people. D.C. has always been a deep inspiration to me as a person and a musician. It is the land where Go-Go Music was birthed which has provided so much for our people.”

“Our sponsors continue to go the extra mile to show that Something In The War is so much more than a festival. The goodwill we generate is a defining trait of who we are. We will always have the hottest artists, but to pair that energy with these brands showing up for the community is what makes this festival a vehicle for change.”

“If you’re celebrating music, if you’re celebrating Black excellence, if you’re drawing attention to the people who have dedicated their lives to knocking down barriers and uplifting our communities — then there is no better place to do that than in Washington, DC,” Mayor Bowser added. “We are proud to be working with Pharrell to bring Something In The Water to D.C. for Juneteenth weekend. DC is open, and we are ready to celebrate.”