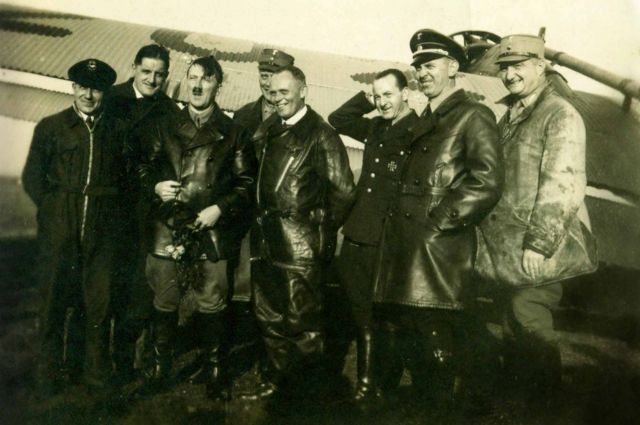 The events of spring 2022 echo those that took place almost eight decades ago. In April-May 1945, the Red Army finished off the Berlin grouping of the Wehrmacht, completing the history of the Third Reich.

The leaders of German Nazism were deciding their fate at that moment. Someone tried to escape, and someone decided to draw a line under their existence in order to avoid the dock.

The FSB of Russia has published new materials related to the death ofAdolf Hitler. According to RIA Novosti, these are documents from the investigation file of Hitler's former personal pilot, SS Gruppenfuehrer, Police Lieutenant General Hans Baur.

In May 1945, Baur was taken prisoner in Berlin by Soviet troops. A case was initiated against him in the USSR, the materials of which are now stored in the department of the FSB of the Russian Federation for the Novgorod region.

A native of Bavaria, a native of the family of a postal official, Hans Baur became a pilot during the First World War. He personally shot down nine enemy planes. After the defeat of the German Empire, the pilot joined the circles of the right, among which there were many military men who dreamed of revenge. Baur joined the NSDAP in 1926. 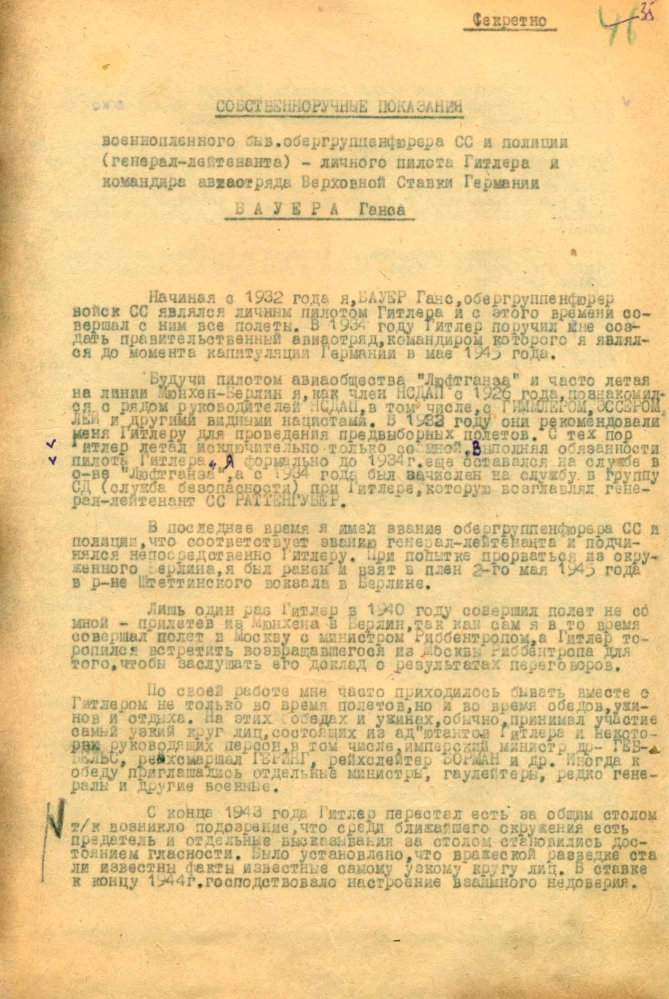 Even before Hitler came to power, Baur, on the recommendation of Himmlerand Hessbecame him personal pilot. In 1934 he took command of a government squadron. It was Baur who brought German Foreign MinisterJoachim von Ribbentrop to Moscow in 1939 to negotiate a non-aggression pact.

Until the last days of the life of the head of the Third Reich, the personal pilot enjoyed his full confidence. It was assumed that Baur could be entrusted with the mission of evacuating Hitler and other Nazi leaders from Berlin. For this reason, he was in the “Führerbunker” and witnessed the last days and hours of Nazi Germany.

During interrogations, Baur told Soviet investigators about what he had seen. According to him, as soon as it became known that the Red Army units were approaching Potsdamer Platz, the women in the “Fuhrerbunker” began to prepare for death. Magda Goebbels told the pilot that she carries a syringe and poison pills that kill instantly, and Eva Braun gave orders regarding her property. 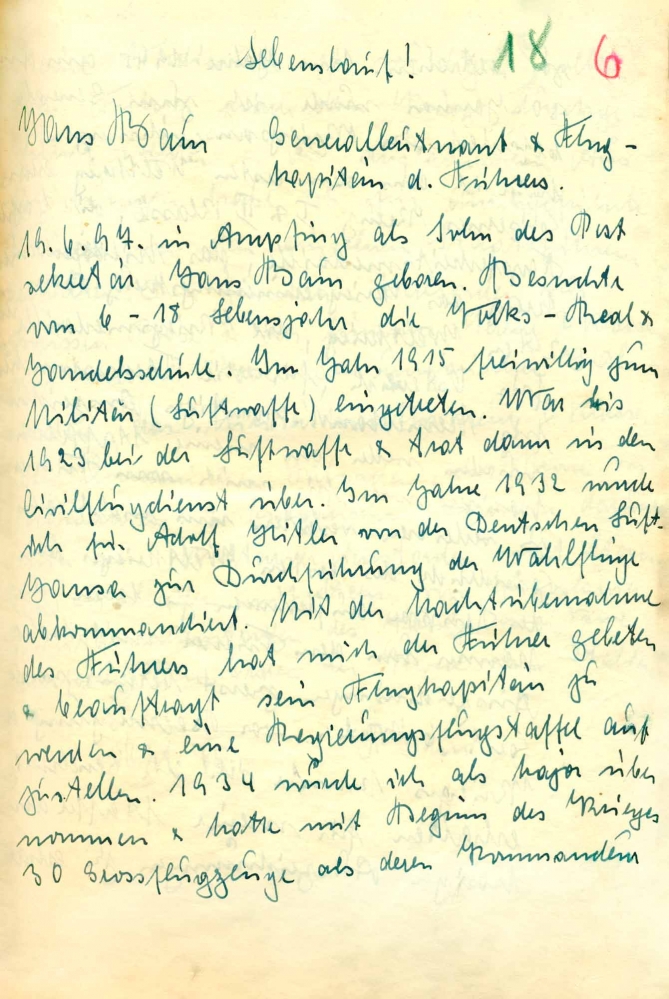 “Everything will fall apart in a few hours”

At the same time, not all things were brought to Baur. According to his testimony, the news of the wedding of Hitler and Eva Braun came as a surprise to him. Everyone in the bunker agreed that the Fuhrer agreed to formalize the marriage in exchange for Eva Braun's willingness to die with him.

“Despite the seriousness of the situation, we did not yet know Hitler’s final intentions on April 28 and 29,” — stated in the testimony of the pilot. On April 30, Baur was summoned to the room of the leader of the Nazis. Hitler's personal pilot said that the Fuhrer had decided to say goodbye to him: “Baur, I want to say goodbye to you, I want to thank you for all the years of service.” The pilot's gift was a Rembrandt portrait of King Friedrich that hung in the bunker.

Baur tried to dissuade Hitler: “My Fuhrer, you cannot do this, because then everything will fall apart in a few hours.” Hitler replied: “I appointed Grand Admiral Doenitzhis successor. He will end the war. My soldiers don't want to and can't fight anymore. I can't take it anymore.

What will be written on the grave?

According to the pilot, Hitler was very afraid that the Soviet troops would capture him alive using sleeping gas. The Fuhrer ordered to burn his corpse and the corpse of Eva Braun, so as not to repeat the fate of Mussolini, whose dead body was hung upside down by the Italians by the feet. In parting, Hitler threw Bauru: “Someday I will have to write on my gravestone:” He fell victim to his generals. the answer to the question is it all over with Hitler and Eva Braun. Baur was told that the corpses were burned in the courtyard of the Reich Chancellery.

“On the evening of May 1, my adjutant Betz and I came to Goebbels to say goodbye to him, — Baur told Soviet investigators. — He told me: “Baur, it will be very difficult to get out of here… If you meet the grand admiral, then tell him that we were able not only to fight for life, but also managed to die. At the same time, Goebbels' wife stood completely depressed and pale.

The Minister of Propaganda of the Third Reich went with his wife to the other world, having previously killed his own children.

Wounded, amputated and 25 years in the camps

As for Baur, after the death of Hitler and Goebbels, he left the Fuhrerbunker; as part of one of the battle groups that tried to break out of Berlin. They took care of him, because they expected to get to the airfield, from where they planned to flee from Germany. But on May 2, 1945, in the area of ​​the Stettin railway station, he was wounded and a few hours later discovered by a group of Red Army soldiers.

Baur was considered one of the key witnesses in the case involving the death of Hitler and Goebbels. The Soviet leadership wanted to receive 100 percent confirmed information about their deaths. The Fuhrer's personal pilot had information and knowledge that others did not have. Baur lost his leg due to a wound, and in captivity he was treated, and then provided with a prosthesis. But a member of the NSDAP since 1926, he did not even think about revising his views. In May 1950, the military tribunal of the troops of the Ministry of Internal Affairs of the Moscow District sentenced him to 25 years in prison camps. But in 1955, the Kremlin extradited him along with other convicted war criminals of the FRG.

How fur boots for Hitler were searched in Mariupol

In Germany, Baur wrote memoirs in which he stressed that the main business of his life was aviation, and he had an indirect relationship with politics.

In the memoirs of Hitler's personal pilot, one can find such an episode that took place 80 years ago: “During one flight to Mariupol — on the coast of the Sea of ​​Azov — on board were Hitler, his adjutant Major General Schmundtand doctor. Departing from Rastenburg, we made an intermediate landing in Kyiv. From there, the general in charge of this section of the front was warned by telephone of our imminent arrival. Hitler sat for about forty-five minutes in the airport building. When he returned, he said: “Baur, it is very cold in your plane. My feet are turning into icicles!” Hitler was dressed lightly, not for the weather. I offered him flying boots. He refused for the reason that “they are not his privilege.”

In Mariupol, Hitler was met by Field Marshal Leeb and SS General Sepp Dietrich, head of his bodyguard. Accompanied by them, he went to Taganrog, where very serious problems arose. My crew and I stayed at the airfield in Mariupol, where several fighter squadrons were based. Here I started looking for fur-lined boots for Hitler. Before issuing them, the quartermaster of this base demanded a warrant signed by Hitler himself, and the Fuhrer complied with this demand. Field Marshal Leeb tried to object, but Hitler correctly assessed the situation and the importance of his signature. Subsequently, I often visited Mariupol and saw this paper with a signature hanging under glass in a place of honor in the officers' canteen.

It is interesting that Baur, despite complaining about the difficult conditions of imprisonment in the USSR and the amputated leg, lived a very long life — he died in 1993 at the age of 95.