The talks between the Russian Federation and the United States in Geneva began “amazingly”. Negotiations between Russia and America may end as soon as they begin. “NATO needs to collect money and go to its 1997 borders.” “It is highly likely that we will face the reluctance of our colleagues from the US and NATO to really perceive what we need.” Discord and clash of opposite assessments and forecasts on the eve of large-scale diplomatic events is an inevitable part of life.

However, all the “discord” quoted above comes from the lips of one person – the main “knight” of Moscow at the Geneva diplomatic lists, Lavrov's deputy Sergei Ryabkov. By issuing such diverse assessments, is our Foreign Ministry trying to confuse the enemy and deprive him of psychological confidence? I suspect that something else is true: our chief negotiator himself does not quite understand what kind of surprises he will have to face.

But here's another key difference from the days of Gorbachev, Yeltsin, Medvedev, or even early Putin. The Kremlin is signaling that it is ready for any turn of events. The multi-way move conceived by Putin is clearly ramified. Let's try to decipher it. 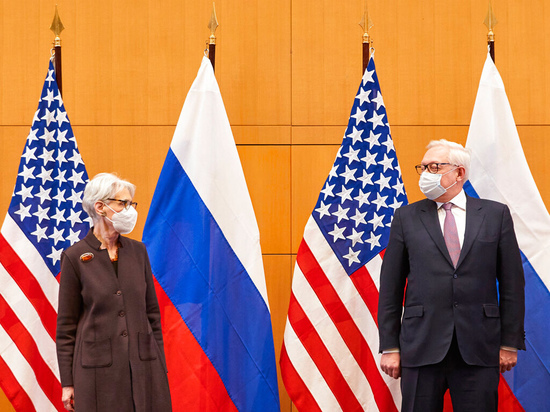 One of the retired leaders of our foreign policy recently told me how, during the first wave of NATO expansion to the east in the 90s, he sat down with Yevgeny Primakov and discussed in detail all the options: what can we counter the process of the NATO swelling? What levers are still at Moscow's disposal? The result of this brainstorming session was a disappointing wording: nothing and nothing. This became the basis of Russia's long-term strategic line: if we cannot prevent the unpleasant development of events for us, then we must adapt to these troubles to the maximum.

What has changed for Russia in this regard since the times of Yeltsin and Bill Clinton? Much & mdash; and with a plus sign and a minus sign. I'll start with the cons. During an interview with RIA Novosti Sergei Ryabkov made a very sober statement about his American negotiating colleagues: “ It is uncomfortable for them to conduct a bilateral dialogue with us. They feel behind them the eyes and ears of the most anti-Russian group in NATO. '' True, true and true again. On the one hand, the British, Poles, Lithuanians, Latvians, Estonians and others & mdash; these are “ little brothers '' who can (and even should) not be seated at the table when the “ big boys '' are talking. But on the other hand, & mdash; completely ignore their position Biden's team cannot and will not & mdash; all the more & nbsp; because not only those who Ryabkov mentioned are breathing down her back.

Moscow's declared tough position of “ not a single new NATO member '' period! '' caused irritation not only among the traditional “ sworn friends of Russia '', but also among those who used to build their well-being on close and intimate relations with our country. “ We retain the opportunity to apply to join NATO. We must cherish this freedom of choice. '' & mdash; this recent statement by the prime minister of neutral Finland, Sanna Marin, can be classified as a very dubious 'achievement' Russian diplomacy. I don’t think, of course, that hot Finnish guys (and also girls) will make ill-considered and impulsive decisions on an emotional wave. But one can discern a very important hint in Finland's position. Moscow's official demand that NATO formally vow never to swell in our direction again is unrealistic.

It is possible to insist that the opponent subject himself to public humiliation only with an absolute preponderance of forces. Russia does not have such an advantage. But let's say a miracle happens, and Biden will solemnly vow: there will be no more new NATO members! I give a tooth! Will this “ Biden's tooth '' be bound? his replacement? Definitely not. As the fate of the Iranian nuclear deal shows, the US president's signature on any international treaty does not bind his political heirs to anything. Moreover, Biden may lose his free hand in the Russian direction even during his stay in the White House.

During his triumphant visit to Davos a few months before the 1996 Russian presidential election, Gennady Zyuganov is said to have erupted in cheering laughter from a group of US Republican congressmen, jokingly telling them, “ We have the same enemies! Both you and I want to defeat the Democrats! '' But now this approach no longer works. When a Republican president sits in the White House, Democrats in Congress severely castigate him for his “ shameful softness. '' regarding Putin. And when control over the residence of the President of the United States changes, then the parties also change roles. And now Republican congressmen are scourging the Democratic president for “ groveling in front of Putin. '' And the fun begins if Democrats lose control of Congress in the midterm elections later this year. Conversations with Biden's team would then be partially meaningless.

What, then, are Russia's trump cards? The fact that she no longer feels like a “ peasant who has nowhere to go. '' The Kremlin is morally ready to disrupt negotiations and has clearly prepared a concrete plan of action in this case. What exactly are the points in this plan & mdash; so far, of course, it is the “ mystery of the investigation. '' But something can still be predicted. What Moscow is strenuously accused of in the West & mdash; they say, if Putin remains dissatisfied with the course of the negotiations, he will attack Ukraine, & mdash; means an absolute dead end for our country. In this case, Russia will turn into a “ non-commissioned officer's widow, who whipped herself. ''

The only thing that makes sense is what other Deputy Minister Lavrov Alexander Grushko said at the end of last year & mdash; 'creating counter-threats'. What exactly is hidden behind this wording, in my opinion, is best in my recent interview with Fontanka. the well-known political scientist Dmitry Trenin explained: “ Most likely, Russia's response will not be military, but military-technical. This implies the deployment of certain types of weapons, including recently tested ones, in regions and waters that are sensitive for the United States, the deployment of Russian military contingents and weapons in certain new territories, the strengthening of the Russian-Belarusian military alliance, the development of coordination and strengthening of interaction with the armed forces. by the forces of China. ''

The beauty of this approach is that it will stimulate the West to new rounds of negotiations. Geneva there may be many more & mdash; it will not be possible to agree the first time, it will work from the second, third or twenty-third.