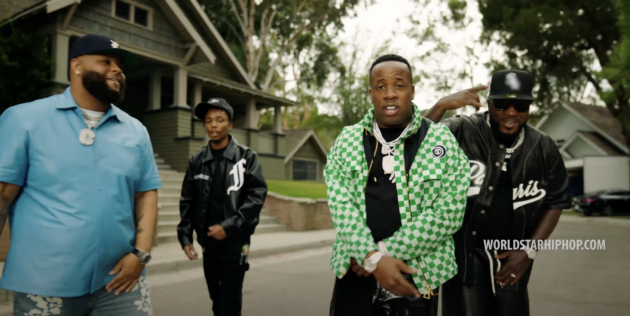 Where your hood at?

Directed by Keoni Mars, Dame and company move into a suburban area, where they bring out the hood in front of their disturbed neighbors. Jeezy sets if off with his dope boy lyrics amongst a group of eye-candy. “Yeah, them bitches in the city, they gon’ talk about me,” raps Snow. “Ask who the brick man, they gon’ to talk about me.”

Yo Gotti follows suite and brings the trap outside (“Nigga I sold more cookies than the candy lady / And I’m from the crack era, I’mma ’80s baby”), while Project Poppa alarms the neighborhood watch security with his Oaktown flow (“Lil nigga lay you down for that gold chain / Lil nigga go crazy with the AK.”)

“Hood Go Crazy” is the follow up to Dame’s “Feelings” single featuring EST Gee and Rick Ross. Yo Gotti’s still reaping the success of his CMG compilation Gangsta Art, while Jeezy’s hot off his appearance on DJ Drama’s new single, “I Ain’t Gon’ Hold Ya”.