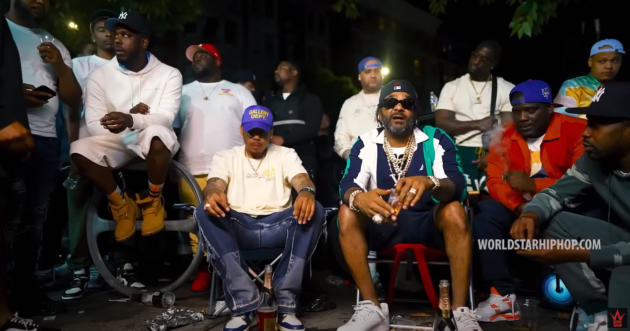 Jim Jones and Vado bring Harlem out for their “Cook Out, their new music video, shot by Flee Flicks and is directed by Jim Jones and Shula The Don.

On the corner of W 112st and St. Nick, the two Harlemites bring their gritty raps at a late night BBQ with locals and their crew. There, Capo pops bubbly and sends warnings on his oppositions. (“We got the choppers in the building/ Please come in peace, so we don’t have to do no killings”), while Vado pours out a little liquor for his fellow East Siders (“Rich champagne with a straw in it/ Pour in it, rest in peace E, once the floor hit it”).

“Cook Out” comes hot off the premiere of Jim Jones and Maino’s latest Lobby Boyz-video “BK To Harlem” and Vado’s accompanying video to his “God Did” freestyle.