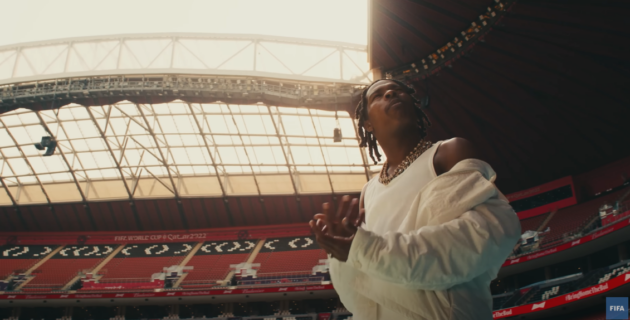 There is no turning back.

Lil Baby closes out the FIFA World Cup with the triumphant music video for “The World Is Yours”.

The track, which was released in September, is lifted off the Official FIFA World Cup Qatar 2022 Soundtrack, and in conjunction with Budweiser, the official beer of the FIFA World Cup.

Directed by Director X, the clip centers Lil Baby canvassing a stadium in Doha, Qatar, riding speed boats, racing through the desert, partying on the beach and performing for a sold-out crowd.

The song samples Tears For Fears classic 1985 hit, “Everybody Wants To Rule The World”, the Atlanta superstar details his grind while cooling off with a Budweiser. He raps, “You can gather all the water, stay thirsty / Took a lot to get us here, we broke curses / Kill or be killed, the field show no mercy / Losers just lose while winners get worshiped / I came here for fun, let’s get turnt up / Somebody pass me a Budweiser, a cold one.”

“I’m excited to make history with Budweiser and close out the 2022 FIFA World Cup with this unforgettable video,” Lil Baby said in a statement. “Working with Director X and the amazing people from around the globe, we’re celebrating what it means to bring the world together and inspire people to chase those dreams.”

Earlier in the day, the final match resulted in Argentina winning the World Cup with a 4-2 penalty shootout over France.