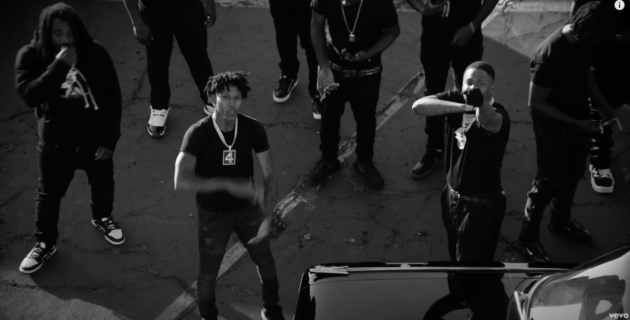 Pray for me y’all.

YG details his take on “How To Rob A Rapper” with his new music video featuring Mozzy and fellow 4 Hunnid rapper, D3szn.

In the black-and-white clip, the Compton rapper pulls up in an old school whip in a parking lot where he meets up with his crew members one-by-one. “Catch a nigga lacking, he slacking on IG Live,” YG raps. “He gon’ show his whereabouts on accident, he be high / He gon’ show the jewels he wearing and the car that he drive.”

Mozzy soon arrives with his goon and delivers his cutthroat lyrics. “We gon’ let him get bumped up before we strip his ass / Nah, never mind nigga let’s get this bag, what’s happening?” adds the Sacramento king. Later on, D3szn pulls up flaunting the goods he’s obtain following a robbery. “To the jewelry, to the plaza, turned the jewels to some guap / I could teach you how to rob, I could teach you how to flock,” raps the Watts native.

“How To Rob A Rapper” is off YG sixth studio album, I Got Issues, which also features Nas, J.Cole, Moneybagg Yo, H.E.R., Roddy Ricch, Post Malone, and Cuco.