At the Petersburg International Economic Forum (SPIEF) in St. Petersburg, which opened on June 15, Perm developers presented a cyber-café where ice cream and coffee were sold by a humanoid robot Dunyasha. The spectacular blonde took orders and communicated with forum visitors, which caused a great stir.

What is known about Dunyasha?

Dunyasha — is a robot cashier with a human appearance, created by the “Promobot” company based on Robo-C -2.

According to the developers, the robot can meet people and recognize them when they meet again, as well as conduct a conversation, talking on free and programmed topics. In addition, the Dunyasha robot has a character.

"Dunyasha — easy to talk to, feminine, a little ironic and, of course, a responsible employee of a cyber cafe. Welcoming and friendly robot, which is always glad to see guests. It will be interesting to absolutely any age. In addition to ice cream and drinks, she has entertaining and educational interactives in her program. In a word, the buying process has never been so exciting for the whole family at once, — note the developers.

The — specialists are especially proud of this coating that imitates human skin, thanks to which Dunyasha does not look plastic doll.

“One of the main features of the new model is the hyper-realistic skin that our division in Vladivostok creates. It has high elasticity and is close in its characteristics to real human skin. This allows you to move the artificial muscles of the face as accurately as possible. Because of this, the most realistic facial expressions appear, — told "Izvestiya" founder and development director of “Promobot” OKivokurtsev lay down.

Dunyasha's face is moving. She can blink, move her eyebrows and lips. In her “memory” over 600 variants of human micromimicry, it imitates emotions as realistically as possible. 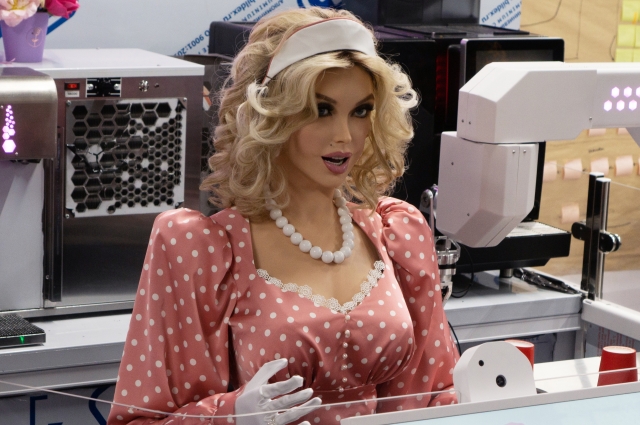 Head, arms, neck also move. Robo-C-2's arms are capable of withstanding loads of up to one kilogram. For example, Dunyasha can show the direction or shake hands with the interlocutor.

“The process of passing commands to the hand is implemented using scripts. Scripts are created using special software in which our engineers work. Three modes are possible: basic gestures during communication, movements on a command from outside — you can ask the robot to make a gesture, for example, wave your hand, and on the command of a development engineer», — said Oleg Kivokurtsev in an interview with Rossiyskaya Gazeta.

Who became the prototype of Dunyasha?

Unlike impersonal robots, Dunyasha has a living prototype, or, as the developers say – social interface. It was the first Mrs. Perm 2014 Diana Gabdullina.

According to the girl, the idea to make a robot with her appearance belongs to her husband — Perm businessman Rashid Gabdullin (he was the director of the Gorky Park in Perm, and now a partner of Promobot), who is also the author of the creation of a cyber cafe.

The robot was created on&nbsp for about six months. So, in order to achieve maximum similarity, the model's face was photographed 360 times.

“It was very exciting for me, at first I was very worried about how it would turn out, and now I I worry about Dunyasha. I really hope that everyone will love Dunyasha, and we will see Dunyasha in many places  in airports, malls, parks, offices», — told Diana to the journalists of the agency 78.ru.

By the way, Diana came to the forum in St. Petersburg in the same image as her robotic copy (a pink dress with white polka dots, beads and even the color of lipstick was chosen to match the spray on Dunyasha's lips).

does a humanoid robot cost?

Anyone can order a humanoid robot, it will cost about 15 million rubles, Fontanka writes. with reference to a representative of the Promobot company. Appearance — at the request of the customer.

«You can even order Justin Bieber for yourself if you arrange measurements with him», — told  « ;Fontanka» the developers of Dunyasha.

As the founder of Promobot noted; Oleg Kivokurtsev, you can already see Dunyasha in Perm (a cyber cafe in the Gorky Park opened this year), and soon a robotic cafe will open in Nizhny Novgorod, Moscow, St. Petersburg and other million-plus cities. Dunyasha will also go to the United Arab Emirates.